Joshua 8:7
Then ye shall rise up from the ambush,

and seize upon the city:

for the LORD your God will deliver it into your hand. 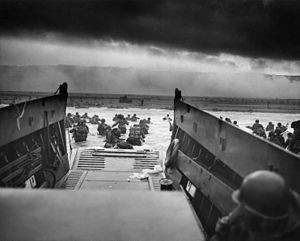 War is flat-out scary, dangerous, and filled with uncertainty and the unknown.  When an army engages in battle, they can’t predict how long they will have to fight, how many lives will be sacrificed, or who will win in the end.

I have heard harrowing narratives by WW2 veterans who stormed the beaches of Normandy. They speak of the gut wrenching terror that enveloped them as they approached the beach and the imposing stronghold of the German Army. As their water-crafts slid across the frothy green ocean,  they waited with dreaded anticipation for the moment when the ramp of their personnel carriers would open exposing them to the merciless torrents of enemy gunfire. In those moments, their biggest challenge was simply to clear the ramp and escape the motorized metal coffins that carried them to the front lines. Many never made it off their boats, and of those who did, thousands still paid the ultimate sacrifice , dying on the sandy shores of Normandy, painted red by their blood. Some never even fired a single shot.

Can you imagine what it would be like to ride into battle with a guarantee that you would not only win, but that the enemy would be delivered over to you by the hand of God Himself? Israel had been rescued from the bondage of Egypt, they had crossed over the Red Sea on dry ground, they drank water from a rock, were led by a pillar of fire and cloud, and they ate food sent from heaven. They personally experienced the power, wrath, and mercy of Jehovah. The God who spoke to them and cared for the like no other pagan god had or could, had given them their marching orders, but along with the command to go to battle came the guarantee of victory through Divine intervention.

that he would see and seize every God ordained opportunity for victory. My prayer is that he preserver, endure, finish well, and revel in the wealth at the end each every battle and challenge he faces today. No temptation is too strong, no customer too unreasonable, no burden too heavy to carry. God has called him into the arena of life and through the Blood of His Son guaranteed him the victory.

Father, anoint my husband with your Spirit, the quickening Spirit of the Living God of the Universe. Be his desire, his Rock, his deliverer. Let his passion for you empower and drive him with courage and expectancy into the battles he will face today and let him seize hold of every opportunity to subdue, conquer, and overcome. Let him experience the sweet taste of victory and reap the deserved rewards of a battle well fought. Let no blessing or opportunity to fight, win, grow, and establish his faith and love for you pass him by. Amen