Mark 9:23b “…All things are possible for one who believes”

The varsity basketball tournament my freshman year in high school is a piece of my history I wish I could erase from memory. We were a tiny, private high school team with just a handful of wins so naturally we were scheduled to play the #1 seeded, unbeaten, top ranked school in the county. We never had a chance and we knew it. We were out classed and out of our league. Not a single one of us entertained hopes of pulling off a stunning David vs Goliath upset.  In short we did not believe victory was possible. That evening, our performance provided a beautiful illustration of the importance and power of hope or rather the disastrous results when hope is absent. We didn’t just lose that evening, we got slaughtered by eighty plus points. Our failure was inevitable so we never even put up a fight.
When it comes to the daily battles I wage to overcome, what I believe about myself, and eternity, is critical to my subsequent success or failures. As King David so eloquently wrote “I would have fainted unless I had believed to see the Goodness of the Lord in the land of the Living.”  When my life is besieged by unspeakable sorrows, pain, and turmoil my belief, that there is something better, and something of far greater worth, empowers me, giving me the strength to persevere and to fight. I choose to fight and endure because in the end I know all I suffer through will be “worth it all when I see Jesus.”
I believe this world is not my home. I believe the most precious gift, God’s only Son, was broken and poured out for

my sins. I believe that I have been redeemed and ransomed by the Son of God. I believe I am gloriously and complete cleansed, forgiven, and covered by that priceless offering. I believe one day I will see the Creator of the Universe. He will wipe away the tears from my eyes and then point to His nail scarred Son, and say “with His stripes you were cleansed and healed.  I believe I will rule and reign in heaven with Him!
Because I believe in Him, I will fight to overcome, heeding His cry to be holy because He is Holy. Because I believe he equips, empowers, and completes the work He has begun in my life, not only will I fight, I will overcome. One day in the near future I will bow before Him and cast all my paltry victories at His feet. I will cry “my Abba Father, your righteous work in me is done, sin & death has been overcome.”
Even so may it be my Lord and my God! 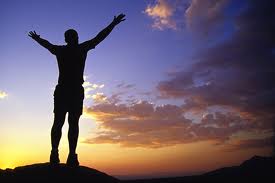